← What does “Impressing” with a Dragon mean?
DRAGOMEIR SERIES – Creature Features! →

In my last episode I stated that on the next installment I would show my latest toy and get into Ohm’s law.

Okay, the only missing ingredient is power, and by that I mean a higher wattage. The minute you start manipulating ohm’s law, you need more power. The SVD device I had been using is an amazing machine, but you can only go down to 1.2 ohms. The law states that to calculate the needed voltage you take the ohms and multiply it by itself, so if your ohms rating was 1.8, then you would multiply it times 1.8. That gives you 3.24 volts. To calculate wattage simply multiply 3.24 times two, which then gives you 6.48. First problem . . . The taste factor says the ohm should be lower. The lower the ohm, the better the taste. Second problem . . . Any device that can fire with a lower ohm rating is only regulated above four volts. And if that wasn’t enough, the power needs to be incrementally higher as you drop down the ohms. The way to get the volts high enough is to raise the wattage, but the device I was using doesn’t go that high. Thus enters the picture . . . The Hana DNA30. With a whopping 30 watts of power and the ability to fire down to .3 ohms, it now seems possible to have your cake and eat it too. Pictured below is my new toy. 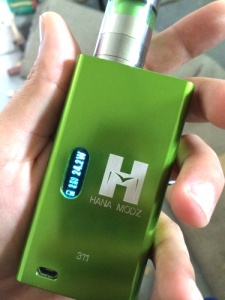 Armed with the Hana and my Kayfun/Patriot I can produce enough power to keep the volts over four by adjusting the watts as high as thirty. The taste is amazing, and all of this without the need for an analog cigarette. I’m currently down to 2 mgs of nicotine and my goal continues to be nicotine free. As Rip Trippers would say, ”Smoking is dead . . . Vaping is the future and the future is now.” Well said, Rip.

← What does “Impressing” with a Dragon mean?
DRAGOMEIR SERIES – Creature Features! →