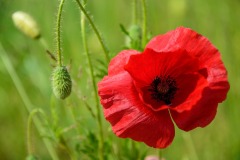 The opium poppy is widely cultivated and its worldwide production is monitored by international agencies. It is used for production of dried latex and opium, the principal precursor of narcotic and analgesic opiates such as morphine, heroin and codeine. Poppy seeds are rich in oil, carbohydrates, calcium and protein.

The earliest reference to opium was in 3,400 BC where the Sumerians in lower Mesopotamia referred to it as Hul Gil, the “Joy Plant.” They, in turn, passed the knowledge of the opium poppy to the Assyrians, who gave it to the Babylonians, who passed it on to the Egyptians. The Egyptians were famous for their poppy fields and the opium trade flourished during the eighteenth dynasty (around 1500 to 1300 BC) under the reigns of Thutmose IV, Akhenaton and King Tutankhamen.  Roman gladiators used opium to enhance their fighting … and to die as painlessly as possible if mortally wounded.

Hippocrates, the father of medicine, saw opium as a helpful narcotic for treating disease. The great physician Galen cautioned that opium should be used sparingly in 158 AD. He said it was better to endure pain than to be bound to the drug. It wasn’t until 400 AD that opium was introduced into China by Arab traders.

Alexander the Great used opium to help his soldiers march farther because they couldn’t feel the pain in their feet; and they could sleep through the night because the wounded were sleeping peacefully under the influence of opium. He introduced opium to India, where its cultivation flourished. One of the goals of Columbus was to bring back opium from India, as its access had been cut off when the Arabs were expelled from Spain. He didn’t get to India, but he brought back tobacco from the New World and smoking tobacco became common throughout Europe.

In 1803, a German chemist named Friedrich Sertuerner synthesized morphine from opium. Sertuerner’s wife overdosed on morphine and died. He then publically warned against its dangers. But morphine was also a great step forward in medicine. It allowed doctors to do true surgery for the first time. Morphine was heralded as “God’s own medicine” for its reliability and long-lasting effects. By 1827, the E. Merck & Company of Darmstadt Germany was commercially manufacturing morphine.

A new technique for administering morphine was developed by Dr. Alexander Wood of Edinburg when he invented the syringe in 1843. Wood believed that if morphine was injected instead of swallowed, “patients would not hunger for it.” He was wrong; and several of his patients became dependent.

John Witherspoon warned his fellow doctors in a June 23, 1900 article about their indiscriminant use of morphine. The morphine habit was growing at an alarming rate; and doctors were culpable for “too often giving this seductive siren until the will-power is gone.” Pointing to the Great First Physician, he said doctors should “save our people from the clutches of this hydra-headed monster” which wrecked lives and filled jails and lunatic asylums.

In my forthcoming book –

“Daughter of the Dark Lord, Book One, The Burning Sky”

the Dark Lord of the Provinces, a manipulative, heartless and cruel ruler, attempts to control the Denizen people that he rules by allowing them to become addicted to the medicinal serum.  His plan is to cut off the supply of the Hul Gil, and then establish it once again, only this time with contingencies tacked on.  In essence, he would be creating voluntary slavery with himself as the Dictator.  Whenever the Dark Lord wanted something, he would simply cut off the drug until the people complied with his wishes, thereby maintaining power over those he considered to be worthless underlings.  His daughter, Katherine, who is aware of the monster that is her father, is still shocked and stunned at the depths of his sadistic inhumanity and is determined once again to thwart his malevolent efforts.

The book takes place on the Provinces of Hell, not a destination that anyone would want to find themselves, and yet to her chagrin, Katherine is not only the Dark Lord’s daughter, but a potential victim of his evil plot.  She must find a way to survive and somehow escape this retched place.

The book is in the editing stages right now, but in the meantime, keep checking back for updates and more interesting facts about Katherine and those who choose to fight in her behalf in –

“Daughter of the Dark Lord, Book One, The Burning Sky”

A prequel book to the Dragomeir Series Books One – Three

Also available for purchase at www.solitaireparke.com and various other locations – in multiple formats. 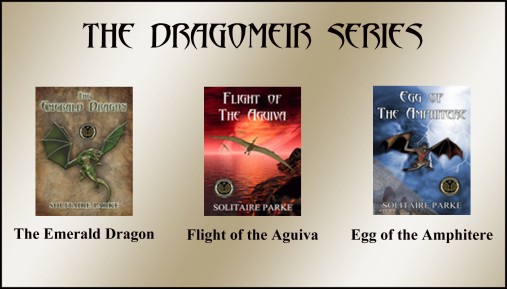 The End Is Only The Beginning.