Cover Launch: DAUGHTER OF THE DARK LORD, Part Four, OUT OF THE ABYSS by Solitaire Parke 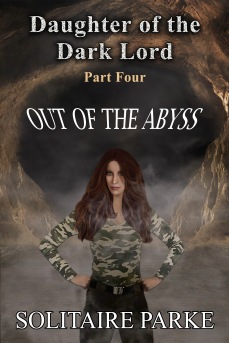 OUT OF THE ABYSS

I can’t wait for you to return to the adventures of Katherine Pendragon, Daughter of the Dark Lord of the Provinces.  She navigates a whole new journey with unexpected difficult decisions, old and new friendships, and of course, dragons.

After traveling through time, Katherine finds herself in Iceland where she reunites with people from her past, although they don’t all remember her.  Cystic is a trusted old friend, and Tanis is destined to be of great importance in her future, belonging to an organization called the Thaumaturgists.  Cystic takes her to Mt. Scartaris, the home of dragons and their stewards, where she proves herself to be a worthy leader.  Queen Mother/Katherine, brings change to their chaotic and undisciplined lives to protect them from future harm.  But not long after, she learns of a greater threat.  Cystic has known for some time that Mt. Scartaris is an active volcano which is currently displaying critical signs.  To further complicate matters, there is the abyss.  Now Katherine must engage the help of the Thaumaturgists, a clan of wizards, and find a new home for her family before the eminent disaster.

I hope I’ve piqued your interest.  To find the other books in the Daughter of the Dark Lord Series and the Dragomeir Series, as well as other works and fun extras, join me at www.solitaireparke.com. My books are available at Amazon, Barnes & Noble, & various other locations listed on the website. You will also find me on Pinterest, Facebook and Goodreads.

Daughter of the Dark Lord – Part Two – The Alberra Project is finished.  The last six months have been chaotic, as the holidays and life in general seemed to hijack my writing time.   But The Alberra Project has progressed into editing mode and will be available in eBook and paperback very soon. The first book, Daughter of the Dark Lord – Part One – The Burning Sky, has been out for a while now and is available at a variety of locations – all of which can be reached from my website – www.solitaireparke.com.

The Daughter of the Dark Lord books are prequels to my previously published Dragomeir Series –  a must read for anyone who loves dragons and other wonderful creatures. I’ve always been intrigued by dragons.  They are magnificent creatures who interact in the most unique ways with their riders and fellow beings and have characteristics that are remarkably like humans at times.  They’re quite brilliant and good-natured, contrary to all the bad press they’ve been given over the centuries.

Part Two continues Katherine Pendragon’s journey as she comes of age on the Provinces of Hell, a dark and often unnerving place in which to grow up.  She unwittingly learns the truth about her father, a reality she has long dreaded.  With her beloved dragon by her side, Katherine faces her biggest challenge yet as she struggles with the knowledge of her father and an uncertain future, both for herself and those she would free from this vile world.

Stay tuned for the forthcoming endeavors of Katherine Pendragon in

Daughter of the Dark Lord – Part Two – The Alberra Project.

My other books are available, along with “Extras,” at –

The Eternal Amulet of Ele-Amarna

Excerpt from DAUGHTER OF THE DARK LORD – Part One – THE BURNING SKY:

(Cheron – the true specter of death, Ferryman at The River Styx – speaking to Katherine Pendragon, the daughter of the Dark Lord of the Provinces of Hell)

“Your father and his loyal demons cannot cross flowing water, and I speak not of the river of death.  Only through me may you cross the Styx.  These lands are not your prison and there are no conventions which bind your fate, but without an army, your father’s curse will be the end of us all.”

Cheron reached into his robe and pulled out an amulet attached to a golden chain.  Gazing at it for a moment, Cheron’s energy spiked, almost unnoticeably, and then passed.  He handed the piece to Katherine hesitantly, as if he was about to lose something meaningful to him.

“The most precious gift I can give you is this.  The Eternal Amulet of Ele-Amarna.  It will give you control over Bahn Fahr and the Army of the Dead. “

The Amulet of Ele-Amarna was an ancient vial, one and one half inches in length, attached to a solid gold chain, which was eighteen inches in length.  The six gold rings surrounding it, would spin in the manner of a combination lock until they lined up, allowing it to open.  Katherine had no knowledge of what would happen once it opened, but she did know that her energy combined with that of the amulet would call up the Army of the Dead, and their subsequent leader, General Bahn Fahr.  The General resided with his army in the Province of Sheol. This might be the only way to defeat her father.

But the Amulet came with a warning:

“But beware . . . if the Amulet is destroyed once the Army is called, you will unleash dominion over the living by angry legions of those who cannot be stopped or killed.  Be warned, Ariella.  Hold the Amulet and call the Name of Bahn Fahr at the peril of all you hold dear.”

Does Katherine resort to using the Amulet, or does she find another way to to thwart the plans of her malevolent father, the Dark Lord, and his army of demons?  The answers can be found in

DAUGHTER OF THE DARK LORD – Part One – THE BURNING SKY

at my website www.solitaireparke.com, where it can be purchased at numerous locations in a variety of formats.

I look forward to hearing from my readers.  Let me know if you have any questions or comments.

Posted in author blog, books about dragons, Daughter of the Dark Lord - part one - The Burning Sky, dragon books