Okay, here we are again, and on the verge of a full understanding of why the vaping experience tends to come up short on satisfaction.

When you first get into vaping, there’s a quiet unspoken assumption that the result of what we’re doing is the way it’s supposed to be. Oh contraire. . .If you had never eaten a steak and were to some degree unsure of what it was, then when you finally took a bite you have to go with what it tastes like right then and there. But what if the steak you were attempting to eat was made out of Styrofoam. You would think that all steak was supposed to taste like that, simply because you didn’t have anything else to compare it with. Right? Steak’s no big deal and it tastes like…well nothing really. Now do that for years, until one day some nice person gives you a medium rare T Bone steak that would melt in your mouth. That would rewrite the whole steak experience.

Now imagine taking a vape on a device that will actually deliver the flavor that was engineered into the E-Cig. There are over one thousand flavors available on the open market and instead of receiving a fraction of the flavor, you get the whole burrito. The soft drink flavors actually taste like they’re carbonated. There are some that were created to be heat sensitive, so they taste like one flavor on the inhale and another on the exhale.

In the vaping world, there is no substitute for superior hardware, but moreover, there is none for excellent wetware. Shown below is the company that makes my favorite e-liquid. The company is called Dekang and they make a full line of flavors. 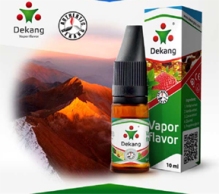 To start your search for a better e-liquid, I would suggest this location –

Understand, this website is only one of many that carry this line of fine products.

On my next installment I’ll show my latest acquisition, and get into the best way to manipulate Ohm’s Law. 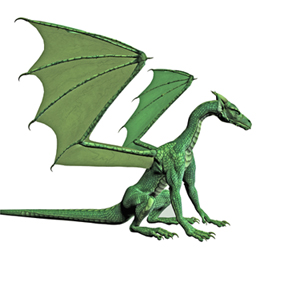 A lot of questions have been asked already about the ending of “The Emerald Dragon” and the second book in the Dragomeir Series, “Flight of the Aguiva”. It does my heart good to know that interest in these novels is growing. Thank you so much! At the end of Emerald, a young Aguiva dragon is missing (That’s pronounced Ah-Geeva).   The first part of the story involves the disposition of said youngster. You’ll remember him from Emerald as Bullba, dragon to the rider, Analise.

A second Crystal Key is located, new species are discovered and Tanis gets to fly Demi on another planet. We get to learn more about Queen Mother and some of her kids (I didn’t say that out loud). I’ve had so much fun with these books and I hope you do too.

I wanted to reveal more on the impressions with book two; you know, how dragons find their riders and how the system works for everyone. Sometimes things are not what they seem and life gets tough. Tanis learns that the impressions don’t always work the way he thought they were supposed to. Especially with Aguivas. There’s lots of action, with a great deal of fighting and plenty of dragon fire. I’ll keep you posted on when the first few chapters will go online. So stay tuned to see what’s coming next!

Posted in The Emerald Dragon Project

It took three months to get to a point where I could put the cigarettes down and walk away, so I didn’t start counting until then. I mean fair’s fair right? Every three months or so I would drop the amount of nicotine by about half. Every time I did, I vaped more for awhile, but I think that’s pretty normal. It eventually tapers off and goes back the more predictable amount. I started off vaping 24mg of nicotine and one year later I’m down to 3mg. I’d say that was progress. My endgame, my personal goal is to vape nicotine free.

Okay, so my device was pretty much top notch, and it occurred to me that the tank was and had been dropping the ball. The flavor I was supposed to be enjoying ceased after the first few minutes on a fresh refill. According to everyone on Youtube, it wasn’t the way it was supposed to work.

I tried just about every clearomizer there was, and admittedly some were better than others, but still could not be confused with the vaping version of the Holy Grail.

That was when I found the KayFun and the Russian 91%. These tanks feature rebuildable filter coils and cotton filtration. That means kanthall wire and cotton balls. High quality stuff at bargain basement prices, and I was elated. I could build my own coils the way I thought they should be built and they would work longer, better and every time. Check the image below. 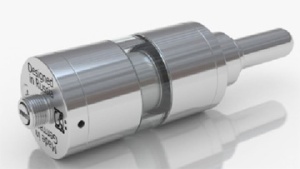 Vaping took on a whole new wrinkle and it changed how I do things again. Stay tuned and next week I’ll show you what that means. To see the KayFun in action check out this link –

Well, now armed to the teeth with information gleaned from my research, I set out to upgrade my vaping setup. I had been using a very weak Ego style battery and a pen tank. Miserable to say the least, and let me hasten to add, miserable only in that it wouldn’t hold up to chain vaping which is what I had begun doing. I might as well have had it surgically implanted to my face. Doing without cigarettes was hard! For a bird’s eye view of round one and two from other peoples point of view, click here.

At my local neighborhood vape shop I spotted what I thought was the end all – do all and was mortified by the price. Back to the house and two hours later I had managed to find the little beauty online for half the amount. This device is called the Innokin SVD (Superior Vaping Device) Clever huh?

It took two weeks to get to my house and when it did I put the battery in, the battery I also found online for an extra charge, and it rocked my vaping world and it still does to this day. It is an excellent device, well built and sturdy. For an up close look at this device click here.

For those who do not wish to travel at the moment, just look below.

Once you make the plunge understand that for awhile it’s like grabbing a tiger by the tail. Devices like these need batteries and a charger… so it’s not just buying one thing, but several things. It turned out to be the best purchase I had made to date. Well worth it! Below you will also find images of the batteries and the charger. 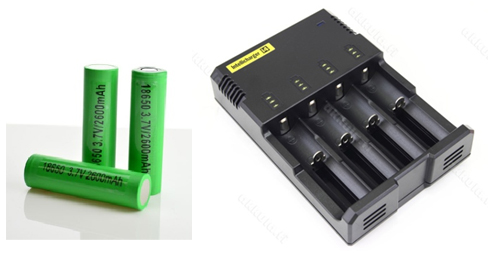 Next week I’ll explain why it wasn’t enough and what I did next. Geez, I’ve turned into such a Geek! Hehehe

A Fantastic Day at Barnes and Noble! 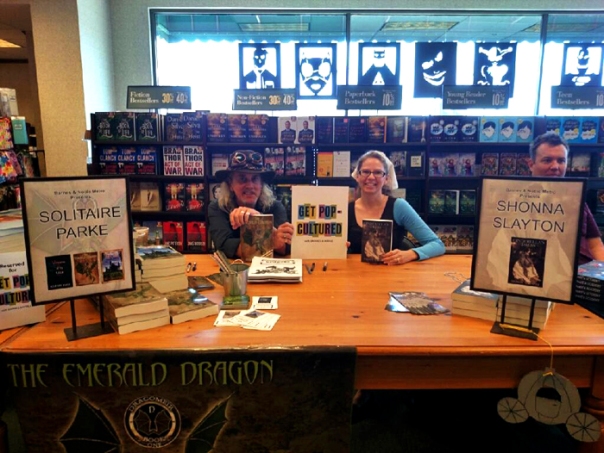 Saturday was the BIG day! I just came away from the Science-Fiction/Fantasy Book signing event at Barnes & Noble (Phoenix, Arizona) and man oh man, was that an experience or what?

Eleven authors, myself included, participated with our books being featured during the Marvel and Science Fiction/Fantasy day. Hundreds of people in costume, some of which looked like they just walked off a movie set. They were actually that good! My sales went well and I got to meet a lot of interesting, and sometimes very odd people. It was noisy, boisterous and amazingly fun! I’ve got to give the staff at Barnes & Noble credit because the entire event was coordinated and extremely well managed from start to finish. They made us all feel welcome and treated us like super stars. I personally can’t wait to go back. It was suggested for me to wear a costume so I chose to go as Van Helsing and I’ve got to admit that I had a great time! Be sure to visit my Website and Facebook page for more photos of the day’s event!

My family and I found ourselves in a vape lounge one year ago with little to no knowledge of E-Cigs other than what we had heard from friends. The staff there was about as helpful as tits on a boar hog, and worse, I hadn’t really done any research at that point so I didn’t even know what questions to ask. Through a whirlwind transaction, we had two E-Cigarettes, enough liquid for, the guy there said two weeks, but in reality for two people it was about three days, with an enormous bill to pay before leaving. Shown below is one of the units we purchased that day.

I had no idea about the fluid except that the guy there said I needed it. He did however allow me to pick the flavor. Wasn’t that nice of him? Turns out it was a 60/40 blend with Propylene Glycol on the high side and Vegetable Glycerin on the low. My Nicotine level was at 18 mg. and it was supposed to simulate a Marlboro cigarette.

One week later it failed, and I took a trip down to the vape store where I was informed about the filter coil needing to be replaced. They hadn’t said a word about that when I purchased it. I was okay with buying them periodically, but I wasn’t okay with only hearing about it after the unit failed. Needless to say, I went on an all out campaign to learn everything about my new endeavor, and kicked myself in the butt for not doing it sooner. I knew better . . . well I thought I did.

What I’ve learned from all of this…

This kind of e-cig was a newbie money pit that was probably okay for the occasional smoker, but not for a person who was trying to depend on it for the total cessation of analog cigarettes. The battery which is listed in milliamp hours (MAH) on this unit was 450, or in the real world about 2 hours and will need a charge. The filter coil as it turns out was a big deal. It’s the “doojigger” that heats the liquid and causes the vapor that you breathe in. It didn’t take too much longer to realize I needed to purchase better equipment, and that the first round of hardware was what I thought I wanted, but was definitely not what I needed.

Join me next week for round two of this vaping saga as I explain where my excitement took me after I became a bit more knowledgeable. In the meantime, I encourage you to comment below and share your experiences and what you’ve learned about e-cigarettes!